The BESIII experiment is located at the BEPCII electron-positron collider in Beijing. Since 2008, the experiment has been collecting data in the charmonium mass region at center-of-mass energies up to 4.6 GeV. In addition to the world’s largest data set with more than 5 billion J / psi events, further high-statistic data sets were recorded for heavier vector resonances in direct electron-postitron annihilation.

The detector features modern detector subsystems for precise track reconstruction of charged particles as well as their identification and detection of photons. Its instrumentation properties in conjunction with the nearly complete coverage of the solid angle provide excellent opportunities for the spectroscopy of hadronic resonances. In addition to the spectroscopic investigation of new and also exotic hadrons, the experiment investigates weak and rare decays of D mesons as well as decays of tau leptons.

In total, more than 400 scientists from more than 65 institutes in 14 countries are involved in the experiment. Our working group is one of the founding members of the BESIII collaboration. We are particularly interested in the spectroscopy of light hadrons.

Currently, our analysis activities focus on the identification of predicted exotic resonances consisting exclusively of gluons. By understanding these glueballs, we can gain new insights into the binding of quarks and gluons to hadrons through the strong interaction. Ultimately, this aims at understanding fundamental phenomena that are still poorly understood, such as the confinement of quarks in hadrons or the generation of the mass of hadrons.

As a suitable source for the production of glueballs are J / psi decays to light hadrons, since these are produced by gluon-rich processes. Possible candidates for glueballs have already been observed in such processes. For a clear identification of these candidates as glueball, it is important to understand their production and decay properties. Complementary to gluon-rich processes, we therefore also investigate the production of light hadronic resonances in two-photon processes. By comparing the observed rates of production in both processes, we contribute important information that, combined with theoretical calculations, helps to shed light on the nature of the observed glueball candidates.

In order to achieve our research goals, we are involved in data taking and analysis. The accumulated data which amounts several TB is stored at the computing  center in Beijing and subject to a first preselection using C ++- based algorithms carried out on about 10,000 modern CPU cores. The reduced data can then be further processed on the institute’s own computing cluster. Of great importance is the identification of possible intermediate resonances in the analyzed decay process by means of partial wave analyzes.

Our research activities are funded by the DFG, which enables close networking with research institutions in Germany and worldwide. Detailed information can be found at the web pages of the research group DFG2359  and CRC 110.

For data analysis, we continuously offer topics for bachelor and master theses. In addition to the work on current problems in hadron physics, this offers the opportunity to gain experience in modern data processing and team work in the context of an international collaboration. 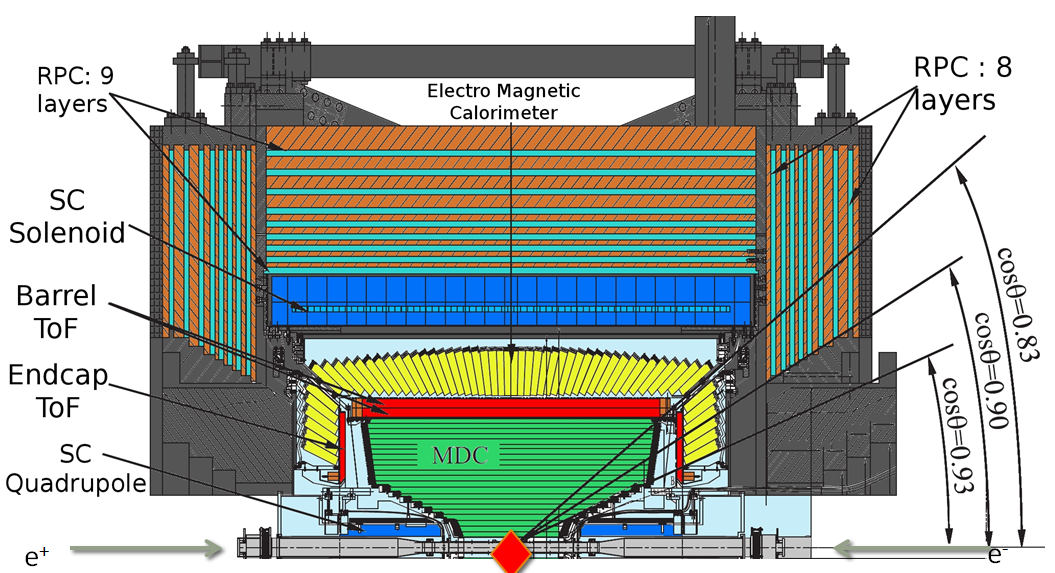